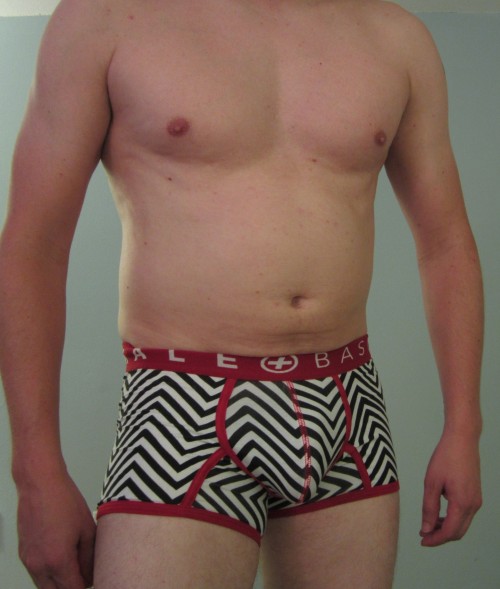 The Male Basics Chevron Boxer looks like it jumped off the page of an M.C. Escher drawing.  It is definitely one of the more interesting underwear patterns I’ve ever seen, let alone worn.  Caution: staring may cause hypnosis.  Actually, this may have been their intent since they are essentially asking you to hand over your wallet (more on that later).

Joking aside, this is a decent pair of boxer briefs.  Made in Columbia, these are a blend of 93% cotton / 7% spandex.  The material is just slightly heavier (and a bit stiffer) than the other pairs in my drawer which have a higher ratio of synthetic materials.  Sizing of this pair is consistent with domestic (U.S.) size charts.  I wore a medium and it was right on the money for a 32″ waist.

To give this pair a ‘test drive’ I wore these at work for 10 hours and then wore them to the gym… on leg day of all days.  All in all, it was a rigorous test drive.

What I liked: the construction feels solid.  Unlike the last pair I reviewed I expect that these would last quite a while.  I did notice that the label recommends ‘hand wash delicate’ and ‘do not tumble dry.’  Let’s think about that for a second.  Does anybody really have the time to hand wash and hang dry anything that they wear?  If that’s a pre-requisite for making a $28 pair of boxer briefs last then I would be concerned.  I ran these through the wash and dryer and it didn’t seem to have any adverse effects, at least not on the first try.

Everything held up and stayed put over the course of the day.  No significant creeping and no sagging at all.  The legs did creep up a bit just from repeated standing/sitting.  But given that these have full legs that is par for the course.  I don’t think I’ve ever owned a pair that didn’t do that.  Overall, their performance in this regard was very good, especially considering that they are mostly cotton.  Hanes and FOTL would be all over the place if subjected to the same test drive.

Setting aside the print pattern for a moment, I am happy with the overall look of this boxer brief.  The stitching and use of colored piping provides some interesting highlights and gives the pouch a bit more shape.  Aesthetically, they are very pleasing.

What I disliked: the printed pattern is not my favorite.  That’s just me, I’m not too flashy.  Male Basics does offer their boxer brief in lots of different colors, but there is a cost differential.  The solid color pairs run $2 – $4 cheaper than the Chevron pair. The implication being that these are not interchangeable but are in a class by themselves.  From perusing their on-line catalog it appears that all of their boxer briefs have the same or similar construction.  If that’s the case I would be tempted to go for one of the solid color pairs instead.  But hey, if you like the pattern go for it.

The weight and rigidity of the material (again mostly cotton) is a bit more than I’m used to.  This difference had the effect of making them feel slightly more snug than if they were made from a lighter weight material.  It wasn’t uncomfortable at all, just took a little getting used.  This is a very small critique though in the grand scheme.  Overall I was pleased.

I realize that in the world of high-end underwear that $28 for a single pair is not uncommon.  After all, we are talking about limited production numbers that are not large enough for economies-of‑scale take effect.  But I can’t help but feel that they’ve over-reached with this price point.  I don’t see myself ever paying that much (in 2013 dollars) for any single pair of underwear.   But hey, if supply and demand allow them to charge this then who can blame them.  I wonder if I’m in the wrong business.

To sum things up: