We found Plumbum on Facebook and read their page and thought, “wow they are doing some great stuff.” I then read the site and saw what they were doing. They have engineered underwear to really form to a guy and fit him so much better. Which in this day and age we are always seeking undies that fit us better  and support us through the day. They are a very interesting company and we hope you enjoy the interview.

How did you come up with the name?
It was always important for both Brett and I to explain where the brand came from/ how it was conceived AND what it means AND how to pronounce it. For those that studied Science/Latin, the brand should ring a bell/ ball immediately… If you were 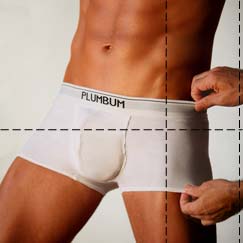 to break up Plumbum in two, the word PLUMB means ‘a ball of Lead’ / ps: also look at the shape of a ball of Lead….. A Plumber would recognize this immediately. Our slogan ‘’Cradle your Mankind” has just been Trademarked which is exactly what our underwear and swimwear does…..it cups the genitals AND keeps it up [gravity is not kind]. Lead, irrespective what size it comes in, is always heavy/ always has weight……

You have engineered your underwear, can you tell our readers a little about how you did that? And what makes your underwear different from the rest?

Both partners worked for South African Airways [both left end of 2005] although I have a Higher Diploma in Fashion Design, majoring in Pattern Making. Whilst being employed we searched the globe for supportive, everyday underwear [without contraptions]. We even looked at sports underwear [which normally has a very high polyester content!]. We couldn’t find. It was Brett who put pencil to paper, but both of us knew what the end result should look like and what we expect of it. So we started butchering old underwear….attaching elastic bands below the scrotum, reducing widths between legs, etc, etc, etc. The first pair that both of us were happy with came 4 months later, but this was only in one style [although numerous changes to my original patterns]. Now we had to find the correct fabric. This search was endless. We knew it had to have less than 6% lycra and not weigh more than 180g/sqm. Three months later through my affiliation with Cape Peninsula University 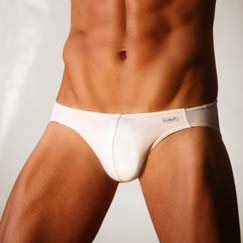 of Technology [Bellville campus], they supplied sampling fabric from a company that only weaves cotton knit and cotton lycra. Needless to say, the first prototype in the fabric that was supplied came out perfectly and we proceeded to make patterns for other styles. When all these styles were perfected it was now a case of finding a local company that would manufacture in small quantities [the standard in underwear companies is 20 000 units, one style, one colour]. We still resided in Johannesburg, Gauteng at that time. I always wanted to be close to the manufacturing of our products [a lesson learnt when I worked at Island Style in Mauritius]. This eventually led us to move down to Cape Town where the clothing industry is largely based. First factory samples were a disaster . This resulted in the dynamics of the Plumbums being incorrect. Two months later this was perfected [taking into account a sample machinist does first prototypes, hands it to a pattern maker for comment, then one gets made on the factory floor and then handed back to the pattern maker]. So how have we Engineered it? We created a pouch [fully elasticated] which is contoured to ones’ genitals, keeping it all supported and comfortable with no need to readjust throughout the day!! Through research we know that Caucasian males have heavier balls and it genetically sits lower [between the legs mostly/ what we were trying to prevent]. We know that our double-layered pouch lift the genitals, which in turn creates a fuller package. The weight of the fabric [180g/sqm], together with the correct combed cotton lycra content is 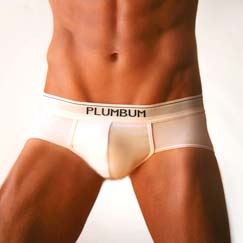 also important to deliver on above promises along with breathability. We have also decided on a fuller back panel [to complete cover the buttocks….gravity yet again…]. And then the Plumbum secret [for your eyes only!]: we have used Fulflex elastic on leg opening and Hipster Bikini style waist and ALL POUCHES. This type of elastic is normally used on swimwear. It’s like a rubber strip that absorbs moisture which in turn seals with the skin…providing more support!!!!!!

What is your product range right now and what are your best sellers?

At present we have three underwear styles: Hipster Bikini [without a Plumbum waist band] which has an extremely low rise, Classic Brief [similar to a Y-front but with Plumbum Engineering] and a Fitted Short [with an inch inleg/ just covers buttocks. In swimwear we have two styles:  Brazilian Swim Brief [similar to Hipster Bikini] and Brazilian Square Trunk [similar to Fitted Short]. At present we are working on 2 more underwear styles and 2 more swimwear styles [all incorporating the Plumbum Engineering]. The Hipster Bikini, Classic Brief and Brazilian Swim Brief have proven to be the most popular. We supply predominantly via mail order, are stocked on the famous R62 wine route and also in a men’s boutique store countrywide [2 in Cape Town, 2 in Johannesburg and 1 in 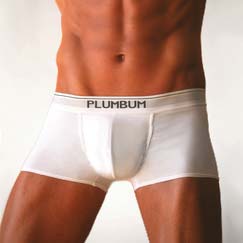 Pretoria]. We also supply to guesthouses, boutique hotels and lodges in and around the Cape Town City Bowl. We launched the Limited Edition ranges on our Facebook group to maintain exclusivity as these prints/ colours/ styles are only manufactured in small quantities with no repeats in manufacturing.

Any plans to expand the line? Or expand into other markets?


We want to thank Preston from Plumbum for taking the time to talk to us and look forward to seeing more from them in the future. 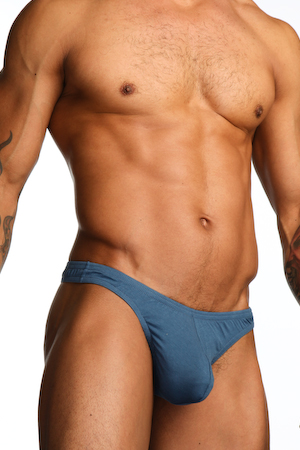 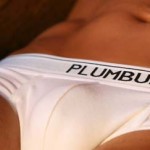