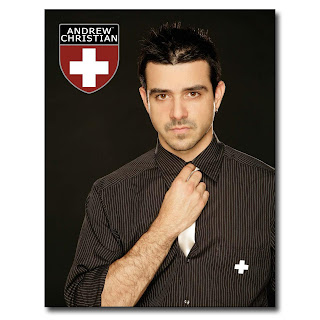 Last week Andrew Christian took time out of his busy schedule to talk to us here at UNB. We really appreciate him taking the time to talk to us about his company and underwear line. In the Interview we talked about: Creativity, Innovation, the Beginning, and Advertising 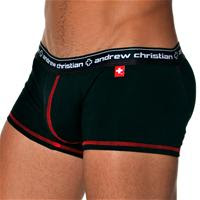 recently. He tries to create items to fit many different occasions from work to play. The Football Boxer is something that is colorful and fun to wear. While the Almost Naked line is made for comfort as well as fashion. Creativity is something that Andrew Christian excels at and we will see more of this in the future.

Innovation
The Andrew Christian line is one of the most innovative lines currently in the market. The anti-muffin top elastic and bamboo are two instances where he has excelled. He tries to think out side the box and create new products people want and enjoy. There are times when underwear looks great but doesn’t hold up to a full days work or a night out. Andrew Christian wants the underwear to not only look great but perform in everyday situations.

Beginning
Andrew started and still designs sportswear. He felt it was the right time for him to start a men’s 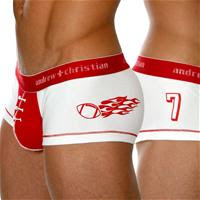 fashion underwear line. If the line were started three years before he doesn’t think it would it would be successful. Men’s underwear in the last few years has changed from boxers and basic white underwear. Now it is something that guys are now paying attention, making choices about and taking risks with.

“Guys want colorful underwear that is fun and light hearted. I try to mix it up and have something fun and new on the horizon. I think people are a little more risqué with their underwear. ” People can take a bigger risk when only they or a select person sees they select will see it.

Advertising
The Andrew Christian line has done more innovative advertising then the typical underwear company. The product is showcased along with the sexuality in their advertising. They try to keep the ad campaigns fresh and interesting. This is accomplished quite well in print, online and 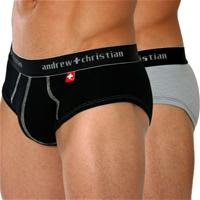 point of sale advertising. You can see this advertising in magazines, websites and at many of the stores that carries the brand (such as posters, postcards and catalogues). On top of all that the company has embraced new technology, from MySpace templates to video podcasts.

Future:
In the immediate future the Flashback will be in colors, just in time for the holidays. They will be available in new six colors. Also on the horizon there will be more bamboo products that will showcase the great eco friendly fabric. Many other styles and products are in the pipeline, but we will have to wait until they are released. Andrew said that they try to come out with a new product on a monthly basis. So you will have to keep checking their site often!

One recent update is the new website is in beta testing. I would recommend you going over and testing it out. It is very user friendly and easy to navigate. It’s very clean and streamlined and one of the easiest sites around to use. 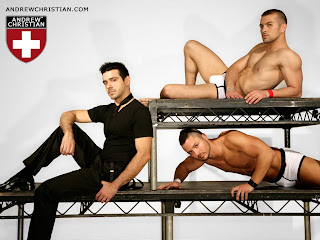 There are several things that set Andrew Christian apart from many of its competitors. First is the creativity in the new products being released. Whether it is the Flashback Boxer, Obama Boxer or Football Boxer. Next, the company is always thinking of what’s next. This is found in the innovative anti-muffin top elastic and bamboo fabrics that are used in the construction of the underwear. This all supplements the great advertising the company does in print and on the web. Lastly is the future, they have new products coming out monthly to keep the company on the cutting edge. All of these reasons have turned Andrew Christian into one of the most sought after underwear bands in the U.S. and the world. 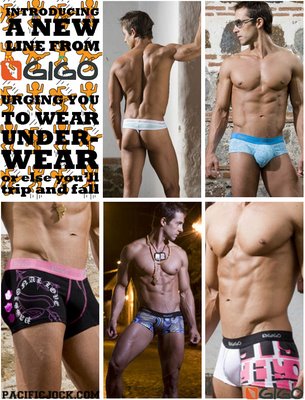 Now imagine what a campaign like this would look if they chose new advertising formats like the floorgraphics
on this site.
Making it really “pop up” would be the kind of ads us girls prefer 😉 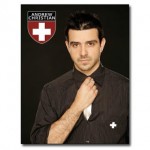