Home » Ask UNB – Why are Thong so popular and How do I start?

Ask UNB – Why are Thong so popular and How do I start? 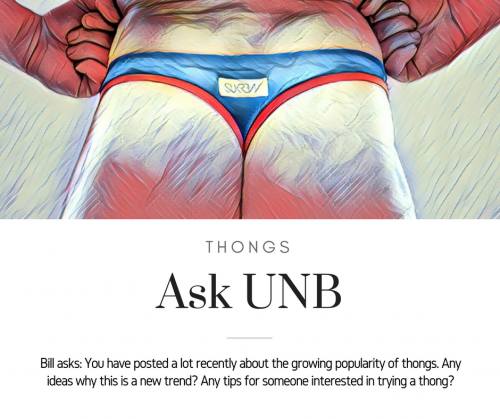 Welcome to our first new “Ask UNB” Here is the first question and answer from a few of our guys.

Bill asks: You have posted a lot recently about the growing popularity of thongs. Any ideas why this is a new trend? Any tips for someone interested in trying a thong?

To me there has always been an upward trend in guy’s getting into thongs. I think it has just been accelerating. It’s approaching 20 years, since I tried my first thong. Back then there was a very limited selection and places to buy thongs. Mail order catalogs and brick and mortar stores were still the main ways to buy anything. I found a handful of places to buy underwear online and Undergear was the leader. Over the years more places to buy underwear and brands have been popping up. It seems the last 5 years or so that the men’s underwear marketing has been growing faster competition wise. Brands are trying to differentiate from each other and adding thongs to their line up was a way to do so. Having more thongs visible to the guys shopping for underwear has to be tempting them to give them a try.

I’d say the Internet for sure is a big factor in the growth of thongs. It’s opened doors for buying with privacy and discussing underwear anonymously with other guys. I know I haven’t had a face to face conversation about underwear with anyone I know. Then I’m going to say the bloggers and conversations on message boards and the like are giving guys the encouragement that it is okay for them to wear a thong.

We’ll be discussing getting into thongs in a Thongs 101 series we are working on. For now the two things I’ll say is first pay attention to fabric of the thong. A nice soft fabric will be more comfortable between the cheeks. Then don’t give up after just one time wearing them. Give the pair a few chances a little more each time. Along with that try another brand or style if the first one doesn’t pan out.

I think TBD really hit the nail on the head, and i have nothing really to add.

The best way to break into the style is fabric, pouch, and cleaning. Get a fabric that is soft with a good airflow, a good pouch that fits your style i personally love enhancer pouches, and get something that you don’t have to hand wash and hang dry for your first. The added cleaning is something you really don’t want to do unless you like the style enough to buy more.

I also agree with TBD, that the internet has certainly been a great help in opening guy’s eyes to the wide variety of underwear available, such as thongs. I don’t think this is a new trend, just a continuation of thongs trending upward with the few years where jocks dominated the market in between. I think guys are getting bored with more conservative pairs and are wanting to try something new, and thongs are a popular choice.

If you want to try a thong, I’d say go for one that looks the most comfortable to you then looks the sexiest. After that, well, the other guys have already got that covered.

UBNmichael
Don’t forget that outerwear can dictate underwear too. With the popularity of skinny jeans, thongs are very practical. Even the skimpiest briefs or bikinis will show lines and could bunch up. With that, I wonder if there is a networking effect: Your bro bends over, you see his thong, and needlessly awkward conversation ensues. In the end, you may become confident enough to wear them.