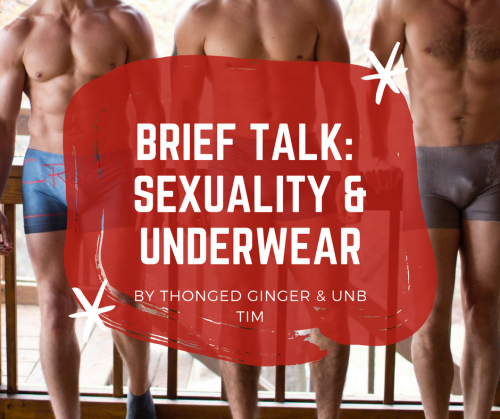 Welcome to our brief talk on sexuality in Underwear.  Not Day or straight but feeling sexy in underwear to turn your partner on and carry it over into fun time with your partner

Unb has always been a place where guys of all orientations can come together and talk about undies. Everyone is welcome and we try not to go too over the top with posts and pictures.  However, when talking to the ThongedGinger I learned something interesting.  Straight guys want to incorporate their over of underwear into sexy time.

Being a gay guy it’s pretty much mandatory who I date will improve their underwear drawer. It’s happened with every guy I date.  Most have kept wearing better underwear after we broke up.  I also tell them that great undies get rewarded.

So what is a guy to do? What seems to be the biggest hurdle in wearing sexy undies to bed with your Mate?

Well, Tim, the issue with straight men and not getting to enjoy more comfortable and sexy undies lies in what I believe 2 places. The male himself has preexisting thoughts and perceptions as to what a true “man” should wear, or the female he is with isn’t very encouraging and automatically thinks they might be gay and breaks up with them to prevent being hurt. That last one is actually true, my wife and I went through that one. The stigmatism for wearing a thong means that I am not a man to its truest form, which isn’t true at all. When you and think of an alpha male, does what he wears underneath really make or break him?

If I was a dude who secretly wanted to wear a thong and wanted to gauge interest in what my mate would say, you could go and find model photos like what we have on the site and see how she responds there. Next maybe see if she would be interested in you in one, then try it. I’m generally blunter, so I just told whomever I was with that I was going to do it and didn’t care the consequences. At the end of the day, if a couch needed to be moved, pictures hung, or car needed minor work I know I could still do it. The only way we can change perception is by making the perception seem ridiculous.

I mean at the end of the day gay and straight men are very alike, I’m pretty sure you and I have several things we enjoy and do that doesn’t set us apart except for the sexual orientation, am I wrong?

I totally agree. When I started UNB, there was a big divide between gay and straight. Over the last 9 years, that has shortened. Guys, regardless of sexual orientation, want amazing undies. They want undies they feel sexy in and can express their personality. On top of that, they are tired of ill-fitting boxers and want some support.

I think straight guys get the “gay” wrap because you want to wear something against the mainstream. If you don’t fit in and are different, well you must be as well. This comes from both men and women. I have heard stories from readers over the year that their girlfriends asked if they were gay because they wore bikinis or thongs. Then telling them real men wear boxers, WTF? I would always tell them to dump them and get someone who supports them.

So this poses my question to you, Why do you think that women haven’t come on board with the world of men’s underwear?

I think you pretty much killed this question already. There is a set definition in the majority of men and women’s minds as to what a male should and shouldn’t wear. Deviating from that norm and you get your masculinity questioned. If I want to wear a pink frilly thong to work on my car, move furniture, or go to the gym then I should be able to without anyone questioning my masculinity. Being masculine really doesn’t have anything to do with what you wear or sexual orientation, I have seen several gay gentlemen whom I would consider more masculine than 90% of straight out there.

The good news is that this topic is way less taboo than it was say 10 years ago. I think now a lot more manufactures are creating thongs and bikinis targeted to the average male. I’m pretty sure UNB has grown with readers during this timeframe as well to go along with the rising demand of guys who want more options than just plain boxers, boxer briefs, and briefs. Nothing wrong with those but everyone should explore more in order to break this social norm.  What do you think could be done to break this social stereotype, Tim?

That’s the million dollar question. How do we get the general public to break the “gay” stereotype. I know in the 70’s (before many of our reader’s times) there were all kinds of bikinis, prints, and mesh. We had professional athletes in ads for Jockey. Hell, we had MLB star Jim Palmer sporting bikinis from the late 70’s through the early 80’s. Then the 80’s came and we got the boring period where it was white, gray and black. And then shortly thereafter the rise of the boxers. Which is finally going away! HUZZAH.

But before I got side tracked, back then your masculinity wasn’t questioned if you wore bikinis or something bold. It was pretty much to each their own. That is coming in men. I think a lot of guys are just fed up wearing crappy underwear. They want it for support and fashion. They don’t want to be limited to one style. Looks at women’s lingerie there are tons of styles they can choose from, it’s only limited by the imagination of the designer. No one bats and eye when they buy a thong or something sexy. The shop clerk doesn’t go “Oh I bet you are one of those lesbians.”

At UNB have welcomed straight guys from the beginning because we are all alike. That was something that has surprised me in the blog. Our origin stories are almost identical. Both gay and straight wanted and noticed great undies in early teens. It was the fit and feel we fell in love with. We have the philosophy “Wear what you want when you want.” It’s about having you partner feel supportive of you and your choices. This is for life in general and for underwear. I mean in the overall scheme of things, wearing sexy undies isn’t the worst thing in the world. I can think of a lot worse things.

So, after my rant. You are a married guy, when did you come out of the closet as an underwear lover to your now wife. Did she have issues or encourage you wearing sexy undies?

Well, my wife was a little apprehensive about it at first, but she finally came around to the fact that it’s what I wear and it makes me feel good about myself. Telling her was actually really easy because I had worn a few pairs before and knew it’s what I liked but stopped wearing them for fear of fitting in. So if you are on the fringe and unsure if you want to try some sexy undies and have a significant other, try a pair on the down low first and see if it’s something that you would want to continue. I would suggest referencing our Thongs 101 but Thebottomdrawer and Underweardude for where to get started. After that then tell them how you fell and I guarantee that they will be supportive if they know it will make you happy. If you are single, then just go for it and that should be a deal breaker if the person you are considering dating isn’t a fan of what you choose to wear underneath.

That’s awesome advice. I totally agree it should be a deal breaker. It is for me as well. There are gay guys who don’t get underwear (SHOCKER I know) and it’s something they have to be open to as well.

I hope you guys enjoyed this talk. We will have another talk soon! 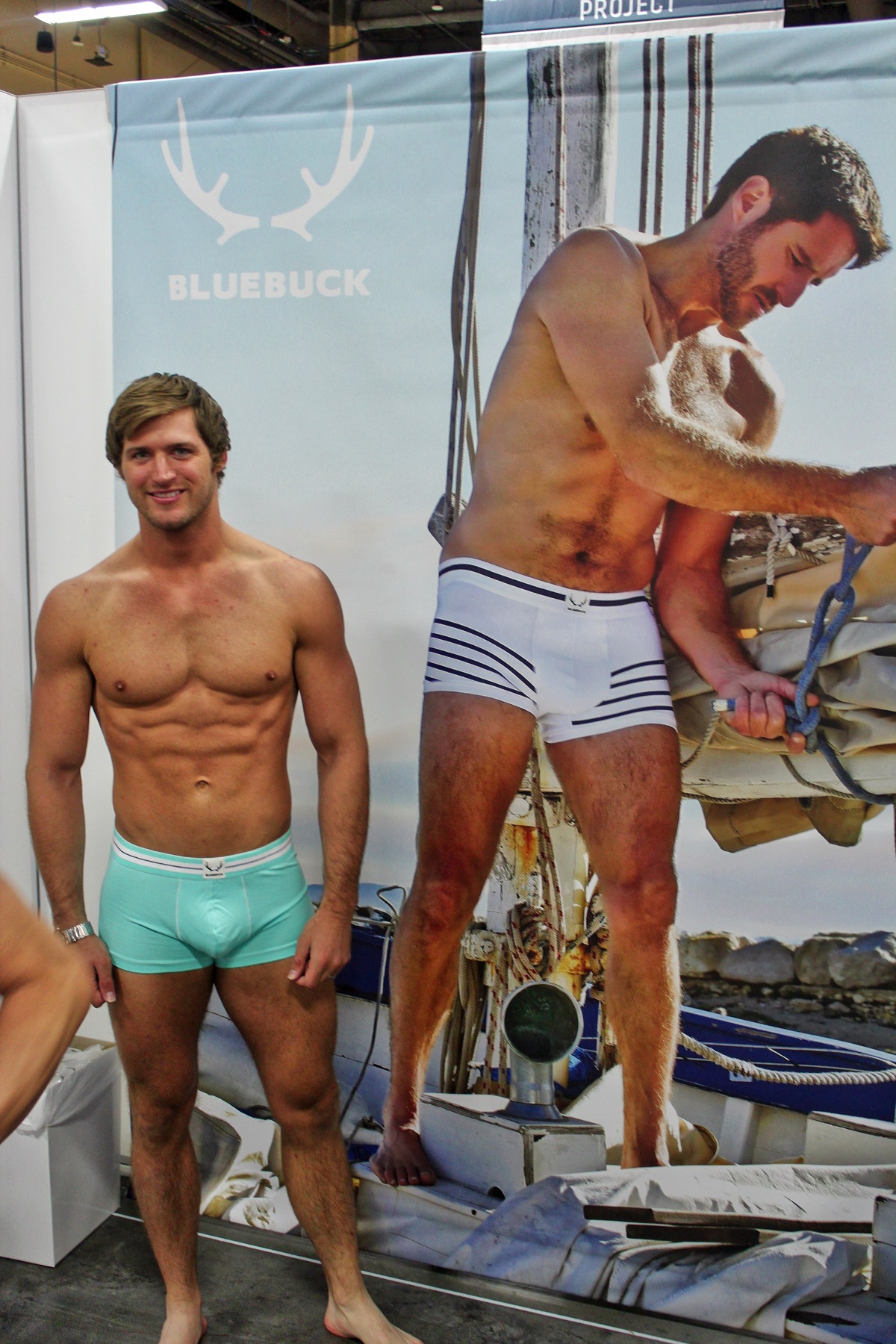 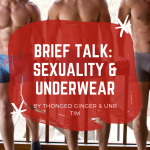