I hope you have transitioned into June with happiness and yummy bulges. I had a wonderful birthday on Friday. I received a bunch of yummy goodies over the weekend that you’ll be reading about in the future. Still no response from Aarin Asker…if you have a lead, let me know. Thinking over this holiday weekend, it was full of American spirit. I even slightly-accidentally wore my new navy blue shorts with white stars on them with my red striped t-shirt (I don’t do themed holiday wear…ever). I was thinking of what to write for this week, and I was thinking what kind of fetish could be considered American.

It came to me, the idea of the classic American football stud. It’s a slightly different idea than the wrestling singlets, or even just the speedos. It’s over-saturated with cultural appreciation, and that doesn’t stop at the sexy-time bedroom. There are a lot of menswear out there that is designed to help you achieve that sports player look for your lover’s (or your) fantasy. Let’s not go into the fact that it’s unlikely a football player would bring his uniform to the bedroom for sexy time. (if any pro football players read this and you HAVE done this, email me you kinky stud, I wanna interview you). While I don’t personally have a thing for the football look (i’m more a Tom Daley fan than a Tom Brady fan). I will hereby share some of my fav football inspired looks if you wanna do some role-play with your favorite tight end (come on, I had to throw at least ONE of these horrible puns in). 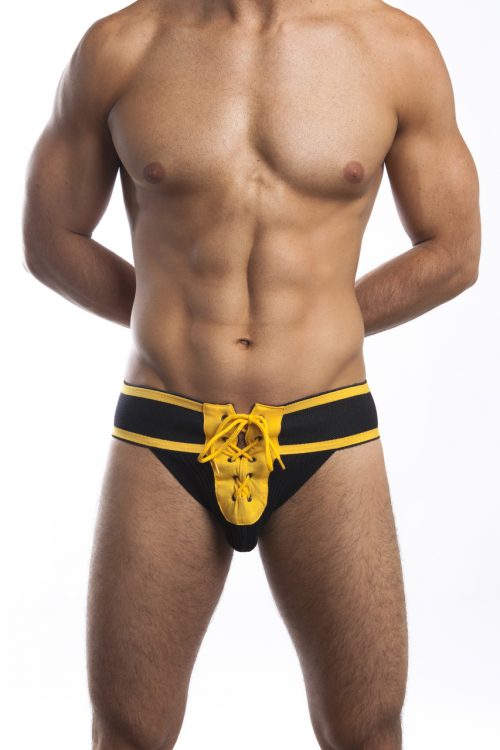 This first one is from Jack Adams. It is the Footballer Lace-up Jockstrap. I would say this is most traditional of the three I’m showing you (I don’t actually know anything about true football wear, so this is purely my judgement). It has 6 grommets so you get three of the very iconic crotch lace crosses (say that 5 times fast). 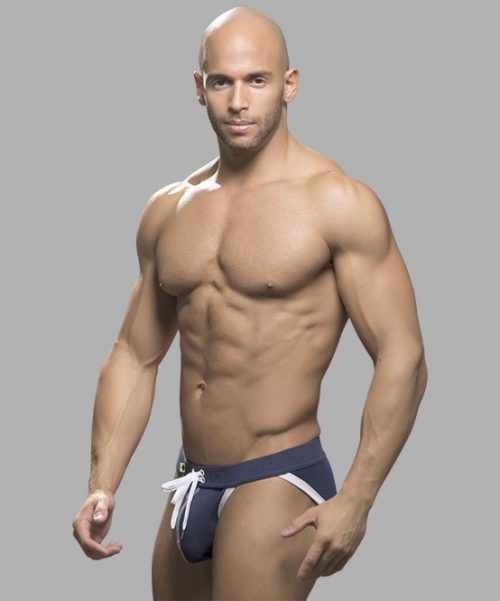 This next one is the Show-It Football Brief from Andrew Christian. It doesn’t exactly read as true football wear. But it might be good if some gay nightclub was having a sports night or something. Having said that, I think this one would be more comfortable if you wanted to wear it to the gym or something underneath some shorts. 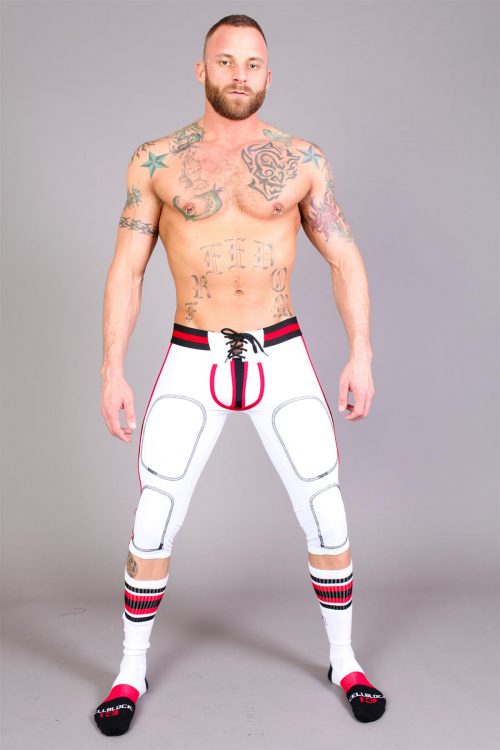 This last one is my favorite (maybe also cause of the model Derek Parker). It is the Renegade Defender Pant Jock from Cellblock 13. This one serves you the biggest amount of football jock realness. You get the lace up pouch, the striped waistband, and the leg pad trump l’oeil. I think that’s the trifecta of football jock sexy time roleplay.

Anyway, my sexy people, I can officially say I spent a small part of my life thinking about football now. Hope you have all the wonderful times, Pride month is upon us, so I’m sure there will be yummy bulges every which way you turn.

Until next time folks, keep it kinky.

TtheAmazing over and out (and proud).