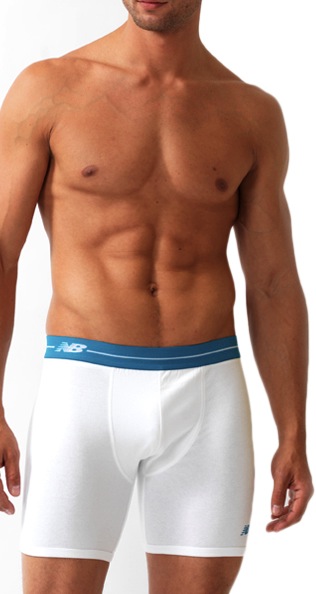 New Balance boxer briefs are not normally what enters my mind when I decide to try a new pair of boxer briefs.  New Balance is a shoe company, after all.  With a boxer-brief from a shoe company, one would expect a mixture of leather and breathable fabric with a large NB emblem in the middle of the waistband and a high arch in the back.  However, I was pleasantly surprised by the experience.

This two pack of boxer-briefs from New Balance came in black and black with a neon green waistband and small NB on the lower left leg opening.  I found the styling to be appropriate, the fabric soft and stretchy (95% cotton, 5% Elasthane), and the fit adequate.  When I first pulled the boxer-briefs out of the package, I thought the style was fairly similar to other boxer briefs I have tried except these had no pouch.  I do not mind a pair of underwear not having a pouch if the fabric is stretchy and conforming.  The New Balance boxer-brief is definitely stretchy and appears to have been made for comfort.  After trying them on, the fabric was soft and the fit was good.

First I wore this boxer-brief for normal daily activity and found it to be comfortable and soft.  I wore dress pants and they slipped up over the boxer-brief easily and never felt like they were sticking to the fabric or pulling on my pants.  I cannot stand a pair of underwear which feels like they are being pulled on by my outer layer of clothing.  Next, I wore them to the gym where they were subjected to five miles on the elliptical machine and weightlifting.  I like boxer-briefs at the gym as they keep you from chafing and these were no exception.  I enjoyed wearing them to the gym more than wearing them as daily underwear.

Overall, the fit was great and true to size large before and after washing and drying.  The fabric was soft and conforming.  The style was fairly normal and I liked the stripe around the waistband.  Although I really enjoyed this pair of boxer-briefs, there are a couple of negatives associated with them.  First, the price is $29 for the two boxer-briefs.  After a few web searches, I was able to find them for $21 with free shipping from a website, so price may not be an issue after all.  Second, some guys will not like the lack of a pouch, but it was stretchy and conforming enough for me.

This pair was furnished for review by New Balance