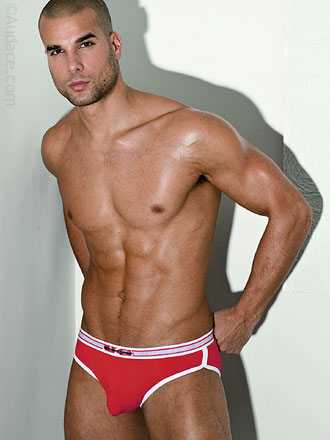 I am always surprised when I open a package containing Undergear brand underwear.  The packaging is plain with the underwear usually wrapped around a piece of cardboard in a clear plastic covering with a white label detailing the product and size.  This is what keeps the prices of Undergear underwear at a minimum and I enjoy that particular attribute of the Undergear company.  Normally, I find the Undergear underwear to be a fantastic fit, nice in styling, and extremely comfortalbe, but this pair of underwear left me disappointed.

This particular pair of underwear is the Undergear Physical Brief in gray with black trim and a pouch styling with no fly.  The waistband is about an inch wide and was very comfortable.  The Undergear website describes this pair of underwear as a “Men’s Gym Brief”.  After wearing it for an entire day, I can see why it has this monicker.  It would be a great brief to wear to the gym or some other athletic adventure if you are a guy who wants real support but does not want to wear a jockstrap, which some guys find too revealing for the gym.

The styling appears to be somewhat retro with a nod toward a more modern retro design.  I found the fabric to be fairly soft but it could have been softer and there was not a lot of give to fabric.  I generally wear a large but I found this particular large to be slightly constrictive which is very unusual for Undergear. I found this unusual because I think their sizes run a tad big for washing and drying shrinkage.

I did have some dislikes for this pair of underwear which lead to a fairly low rating.  There is a very large seam in the crotch area that I found it to be itchy and distracting as I wore the brief.  The crotch piece is rather wide and had some bunching issues for me.  I would rather this piece of fabric be much smaller to fit between the legs as a much better design.  The pouch was very angular in design, and let’s face it, the male anatomy is not angular.  Also, I felt like I was having to pull at the underwear in varying directions all day as it was rather inflexible and was prone to riding up.

These were furnished for review by UnderGear

Editors Note: I tired these as well, and I didn’t have the issues that Shane had. I did go to the Undergear site and saw that they had two reviews, one was a great review and the other had issues with the stitching. I think it may have been a production run issue. If we hear more we will keep you posted but I enjoyed the pair much more then I thought I would. The pouch fit nicely and I had no issues. But part of our reviews are personal preferences and fit. – Tim