Underwear on a Budget

I don’t have to tell you right now the economic situation is not the best. As money gets tighter so do our spending habits. Spending $15 and up on pair of undies for some of us is a luxury. We are having to scale back our purchases or brands we’re buying.

Cutting back doesn’t mean you have to skimp on quality. There are tons of options for buying good undies at reasonable prices. I will be running a series of posts on how to get the undies you want at prices that won’t break your wallet.

But, don’t let that stop you from splurging on something new, like the Andrew Christian Flashback Butt Lifting Boxer, the C-IN2 limited edition patterns or Gigo’s wild prints.
An advance apology I couldn’t find pics to go along with this post, so it will be very text heavy.

Discount Stores
One of the easiest ways to get new undies cheap are at stores like Marshall’s, TJ Maxx, Ross, Filene’s Basement and Century 21. These stores buy and sell overstock or closeouts. If you have visited many of them in the last few years, it’s been hit or miss with the underwear they have. I have found most of the major brands at the stores are 2(x)ist, CK, Jockey and Hugo Boss. The last purchase I made was some 2(x)ist Varsity trunks.

The good thing about these stores is there are many stores located across the country. And one tip for you that I have found, go to the stores in the suburbs. They usually have some great undies that would be gone in the urban stores. For some reason in the burbs they are wearing the boxers or tighty whities. Some of my best finds have been Rips drawstring briefs, 2(x)ist thongs and briefs, some CK briefs. Another great thing about these stores is that you can occasionally find then underwear on clearance. I bought a 2(x)ist thong for $1. Yeah, that’s right for a buck.

The major down side to this type of shopping is the limited sizes and styles. It seems sometime that the only sizes they have are either small or extra large. If you fall in between, you’re kind of left out. This is not the great thing, when you find that perfect underwear, and realize that you can’t find your size.

The best experience I have had at a discount store was at Century 21 in NYC. I swear, when I was there in 2006, I was in underwear heaven. They had a lot of the regular bands mentioned but also Puma, DKNY and a lot more. I spent over 40 minutes in the underwear section alone. I haven’t been back since, but if you plan to go to or live in NYC, I highly recommend you stopping by and check out their selection.

Department Store /Specialty Stores
Believe it or not, at department stores you can get some deals. Granted they aren’t as big as the ones you’ll find at the discount stores, but they can save you money. Two weeks ago I was in Macy’s and they had Versace on sale for 25% off. I know what you’re thinking, this is still pricy, but 25% off on Versace, CK and others is about $5 off the price.

Clearance is another way to save money at a department store. You have to check them often and its something you will have to look for. It’s usually at stores in a highly urban area. In Atlanta, the best store to check out is at Lenox Mall. In the underwear department they have a clearance rack or shelf, which is typically 50% off. I have bought CK, 2(x)ist, and Ralph Lauren on a clearance sale.

Something else to think of too is that some major department stores will give you an extra percentage off a purchase when you use their credit card. So you could get more then 25% off if you charge it. I would recommend paying it off when your bill comes so you don’t have to pay the high interest the cards usually carry.

Specialty stores are often overlooked place to buy undies. Living in Atlanta, I will use an example I know here. An example of this is Boy Next Door. They carry a selection of undies like GoSoftwear, Andrew Christian, Bask-it, Jocko and more. Usually the sizes they have in the clearance section are either small or XL, so be prepared if you go in you may not find what you want. If you’re one of those sizes these stores might be for you.

Big Box Stores
Yeah that’s right, Target, Wal-mart and Kmart have undies. They have the traditional ones you would think they have, but they also have some you’d never guess would be sold there. Take Wal-mart for an example, they have carried in the past a nylon/spandex brand by Jockey. They were sold under the name Life by Jockey. They were similar to Unico in the pouch they have. The only bad thing is they discontinued this line. I really enjoyed them and they were around $6 a pair. Currently they have string bikinis, regular bikinis and briefs. They have also started selling a line from their brand George, but outside of briefs and boxer briefs I haven’t seen much of what they are offering.

Target is one store that really varies the selection. For a while they had briefs, trunks and t-shirts in matching colors. These were a nylon/spandex blend and were reasonably priced. It’s always cool to have matching undies and t-shirt. Well I think so. Currently they are selling more athletic trunks made by Champion. Target is one store that will change and change often. So keep checking and see what they come out with.

Kmart is one you may all find surprising. They bought Joe Boxer and carry the line exclusively there and at Sears. In the past I have bought thongs, bikinis and trunks. I have enjoyed all the ones I bought. The bikinis were a mix of cotton/spandex, which made them fit really well. I haven’t been in a Kmart lately to find out what you can purchase. Like a lot of people around the country, most Kmart stores have closed and are harder to find.
Some Honorable mentions are:

Vendor Websites
Underwear sellers are some of the best places to find the undies you want at a better price. This is done through sales we promote here and also through clearance sales. Audace is one company that in their recent promotions have pushed some of their “Sale Store” items. Most websites have a clearance or sales section. These are the best way to find a better selection. The prices won’t be $5 but it will be marked down quite a bit. Sometimes significantly, depending on the items and when they were released.

One of my favorite sites is Male Basics. They have the 3 pack. Which are just as you think, three packs of undies at really discounted prices. The three packs are constantly changing, but I have bought Unico three packs for around $22. Which if you like Unico, you know this is a deal.
If you go this route, just know you won’t have the most current style. These are usually a line that has been out for a while, or the companies came out with a new line to replace them. If you want the most current style, then you will have to pay for them or find a 20-30% off sale.

Company Websites
The last place you can find deals is on company websites. Not all companies sell directly through their site. So you will need to do some investigating on your own. If you look at the links to the side you can find your favorite brand and see if they have an online store. The ones that come to my mind that do sell from their website are Andrew Christian, Ergowear, and N2N Bodywear.

Just like the vendor sites, some of them have clearance sections. One thing I have seen online is that Andrew Christian has a factory store. Since I don’t live in California, I haven’t been to check it out. If you go to their website, you can see the link for it. They have one of a-kind items and up to 60% off original prices. If anyone is in Southern California, let us know what you got at the store.

Lastly, eBay is another way to get underwear cheap. I have not bought much off eBay. If any of you out there have, please share your successes with the other readers.

I hope you have enjoyed my series of how to get undies on a budget. This is just an overview and as time goes by, I will keep informing you on where to get the best deals, new undies and interviews with companies you want to know about. 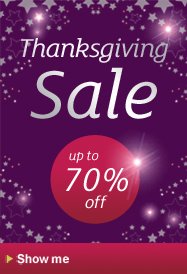 Figleaves - Thanksgiving up to 70% off Sale

Underwear on a Budget