Major League Baseball and a Thong

It was reported widely in the press that Jason Giambi, of the NY Yankees wears a thong when he’s in a slump. Not just any thong but a gold lame tiger stripe thong. Which we know i love all things undies and I’d love to see this beefy stud in that thong. It makes me wonder, does he wear his jock over it? HMMMM

Not only has he worn it from time to time but other players have worn it too. Here is what he 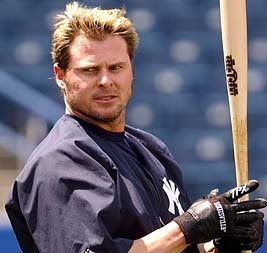 “I only put it on when I’m desperate to get out of a big slump,” he confides.

Over Giambi’s checkered career in the Bronx, he has left the “golden thong” in the lockers of slumping teammates Derek Jeter, Bernie Williams, Johnny Damon, Robin Ventura, and Robinson Cano. “All of them wore it and got hits,” he reports. “The thong works every time.”

Now hot beefy baseball players in hot undies is what I call HOT. I wish they had pics of him in the thong. But I bet you’ll never see it. We all know I like undies and something like this story is rare, a big hot str8 guy telling he wears a thong.

I want to know how he got started wearing the thong to get out of the slump. It has some speculation it was like Bull Durham, but nothing I have seen gave a reason.

If I hear more I’ll let you know! 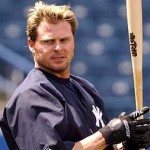 Major League Baseball and a Thong