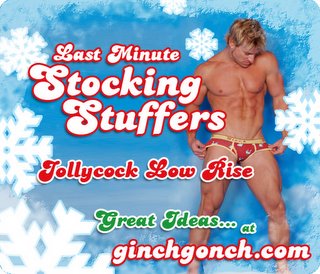 Ok I saw this ad in my email today. Now the picture it self is hot as well you know. I have kinda mixed feelings about Ginch Gonch. Some of their stuff is really cool. like the picture. I really love the low cut briefs, I think again they are sexy as hell. But some of their underwear gives me the creepy child molester vibe. Yeah, the fire trucks and stuff on grown men’s underwear just ain’t right. I don’t know what it is but it’s like you’re wearing underoos at 40, you know just not good.

I like the solid colors, even the pink, and the star ones are ok. But the fire trucks, hockey players, and stuff like that just I can’t do it. Nope won’t happen. I love undies so much but this to me is just a bit weird. I entered their win underwear for a year contest, don’t really care if I win but you know it’s just those times that I usually win what I don’t care about. And I too will have fireman undies. You know I don’t think I could wear these even if I do win them. I could see me and Thomas making out and things getting hot and heavy and then take the pants off and I swear I can see him asking “What are those?” and laughing hysterically till he falls out of bed, hits his head on the night stand and is unconscious for about three hours.

I have worn many undies for guys in the past; I’m pretty open and will wear just about anything. I draw the line at women’s undies, although a lot of friends say my bikinis are women’s undies, they are just jealous they can’t fill them out, heheheh, and children’s undies. I guess Ginch Gonch, which I have no clue how to pronounce them, just reminds me so much of child’s undies that I can’t bring myself to wear them. It’s kinda like dad son role-play gone bad.

But hey I’m not knocking them for anyone else, but hey it’s not for me, if you have some, great, enjoy them, I bet they fit great, but just don’t put any in my stocking unless its solid colors or stars!

I’m a Ginch Gonch fan. I first found the firetrucks and imdeiately thought “How much fun are those!” It reinforces the fun in getting naked.

But then I love jockstraps too! 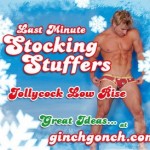